Whether it is used for the appearance of a suite of furniture, or the shape of a soft drink bottle, the legal concept of “trade dress” has been used to protect a wide variety of designs that were otherwise not protectable under traditional notions of trademark or patent law.  While the legal concept of trade dress traditionally referred to the packaging and labeling of a product (see, e.g., Wal-Mart Stores, Inc. v Samara, 529 U.S. 205, 209 (2000)), Trademark Law protects more than a word, term, or name.  Instead, the Lanham Act protects a wide variety of “symbols” and “devices” that identify the source or quality of a product or service.  These non-verbal source identifiers are often grouped together as “trade dress.”  Protection is indefinite in time.
Trade dress today goes much further than packaging, and includes the overall appearance and impression of a product, including design, size, shape, texture, color, and graphics.  (See, e.g., Mattel, Inc. v. Walking Mountain Productions¸353 F.3d 792, 808 n.13 (9thCir. 2003)).  The Supreme Court has held that “almost anything at all that is capable of carrying meaning” could be used as a “symbol” or “device” to identify the source or quality of a product.  (Qualitex Co. v. Jacobson Prods. Co., 514 U.S. 159, 162 (1995) (noting that courts and the Patent Office have protected shape, sound and scent as well as color)).
In the recent Fourth Circuit case of McAirlaids, Inc. v. Kimberly-Clark Corp., 2014 U.S.App. LEXIS 11945 (4th Cir. Jun 25, 2104), the Court discussed a specific limitation that has been placed on the broad concept of trade dress, i.e., that trade dress cannot be used to protect a “functional” feature.  A functional feature is one that “is essential to the use or purpose of the device or…affects the cost or quality” of the product.  (TrafFix Devices, Inc. v. Marketing Displays, Inc., 532 U.S. 23, 33 (2001)).
McAirlaids products a material composed of cellulose fiber that is used in a wide variety of absorbent goods.  As the airlaid fiber is manufactured, an embossing pattern becomes imprinted on the material. The embossed design is important to adequately hold the material together, and must fall within certain general size and spacing parameters.  McAirlaids chose a “pixel” pattern for its products – rows of pinpoint-like dots on the material.  McAirlaids registered its pattern as trade dress as follows: the mark is a [three-dimensional] repeating pattern of embossed dots” used in absorbent pads.  The trademark, given registration number 4,104,123, is shown below:

McAirlaids’ Registered Trade Dress
Kimberly-Clark began manufacturing GoodNites bed mats, an absorbent product manufactured in a different manner from McAirlaids’ pads.  However, because Kimberly-Clark used a similar dot pattern on its absorbent bed mats, McAirlaids initiated a lawsuit alleging trade-dress infringement and unfair competition under the Lanham Act.  The district court bifurcated the issues for trial:  in the first phase, the only question was whether the dot pattern on McAirlaids’ products was functional, and thus not protectable as trade dress.  The district court granted summary judgment to Kimberly-Clark, but the Fourth Circuit found genuine issues of material fact and reversed.
The legal concept of functionality has been defined by two Supreme Court cases.  In Qualitex Co. v. Jacobson Prods., Co., 514 U.S. 159, 165, functionality was defined as a feature that “is essential to the use or purpose of the article or if it affects the cost or quality of the article.”  Later, in TrafFix, 532 U.S. at 34, functionality was further defined as “the reason the device works” or if it’s exclusive use “would put competitors at a significant non-reputation-related disadvantage.”
The parties in this case agreed that pressurized bonding points were functional because these areas actually fused the layers of pulp into a textile-like material.  The dispute was whether McAirlaids’ chosen embossing pattern was functional.
The Significance of Utility Patents to the Question of Functionality.  The Supreme Court emphasized that a “utility patent is strong evidence that the features therein claimed are functional.”  TrafFix, 532 U.S. at 29.  In TrafFix, the central advance of several utility patents was a “dual-spring” design that allowed outdoor signs to remain upright in windy conditions; therefore, the dual spring design was functional, and not “an arbitrary flourish.”  Id. at 34.
The pixel pattern in McAirlaids was distinguished from TrafFix on two grounds.  First, because McAirlaids had registered its design as trade dress, its registration served as prima facie evidence that the trade dress was valid (and therefore not functional) – and in TrafFix the burden was on the trade dress claimant to prove that its dress was “not functional.”  See 15 U.S.C. § 1125(a)(3).  Thus, the burden should have been place on Kimberly-Clark to show functionality.  Second, McAirlaids’ utility patents covered a process and the resulting material, but made no mention of a particular embossing pattern.   Thus, the pixel pattern is not the “central advance” of any utility patent, and is not the same “strong evidence” of functionality as the patents in TrafFix.  See 532 U.S. at 29.
The Appropriate Weighing of the Evidence of Functionality.  McAirlaids also argued that summary judgment of functionality was not appropriate because the district court improperly weighed the evidence of record.  The Fourth Circuit agreed with McAirlaids that it had presented sufficient evidence to create a genuine factual issue as to whether their pixel pattern was a purely aesthetic choice among many alternatives.
The Fourth Circuit, citing to Valu Engineering, Inc. v. Rexnord Corp., 278 F.3d 1268, 1274 (Fed. Cir. 2002) looked at four factors to assess a design element’s functionality.  They are:
(1) The existence of utility patents.  As addressed above, the utility patents disclosed that many designs could be used.  Testimony established that the pixel pattern was chosen for its appearance.
(2) Advertising focusing on utilitarian advantages of the design element.  Some marketing presentations arguably touted the pixel pattern as increasing absorbency.
(3) Availability of functionally equivalent designs.  Both parties’ experts testified that many shapes could be used to fuse the layers together, and that McAirlaids had previously used an embossing design of diagonal lines which had nearly identical performance testing as the pixel pattern.
(4) The effect of the design on manufacturing.Both parties agreed that any embossing design must meet genera size and spacing specifications to successfully bond the layers of material into an absorbent pad.
In light of those factors, the Fourth Circuit determined that sufficient evidence had been presented to raise a genuine issue of material fact; and the issue of functionality should be left for a jury to weigh evidence and to make credibility determinations.
Protection of design features through “trade dress” can be very powerful because it does not expire.  Registration of such design features as a registered mark can provide important legal benefits.  Manufacturers should consider whether their product has a non-functional feature that could be considered as “trade dress”, and whether they should protect such feature.
Bert Andia is a registered patent attorney and his practice is focused on litigation of complex business disputes.  If you would like to discuss the availability of patent or trade dress protection or if you are involved in a dispute arising from alleged patent or trade dress infringement, please contact Bert Andia at 336-273-1600 or via email at bandia@greensborolaw.com

USE OF DESIGN PATENTS IN THE FURNITURE INDUSTRY

Those in the furniture industry who invest in new designs are in a constant fight to protect those designs from others who would rather spend money on designs after they have proven popular.  Historically, design patents have been one tool used by companies trying to protect their new designs.  The expense is relatively minor for obtaining design patents, and the value can be extremely important in, at a minimum, deterring companies from the potential exposure of infringement.
This article is designed just to introduce you to the requirements for obtaining a design patent.
The Patent Laws.        When most people discuss “patents,” they are typically referring to “utility patents.”  A utility patent covers a “new and useful process, machine, manufacture, or composition of matter, or any new and useful improvement thereof….”  35 U.S.C. § 101.   A utility patent is considered as protection for the “function” of an item; it is valid for up to twenty (20) years from the date of application subject to certain conditions. 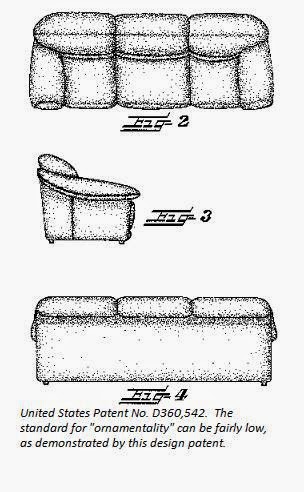 A design patent can be issued for “any new, original, and ornamental design for an article of manufacture….”  35 U.S.C. § 171(a).  A design patent, therefore, protects the way an item “looks.”  A design patent is valid for up to fourteen (14) years from the date of the patent grant.

“The language ‘new, original and ornamental design for an article of manufacture’ set forth in 35 U.S.C. 171 has been interpreted by the case law to include at least three kinds of designs: (A) a design for an ornament, impression, print, or picture applied to or embodied in an article of manufacture (surface indicia); (B) a design for the shape or configuration of an article of manufacture; and (C) a combination of the first two categories. Best Lock Corp. v. Ilco Unican Corp., 94 F.3d 1563, 40 USPQ2d 1048 (Fed. Cir. 1996) (Newman, dissenting); Manual of Patent Examining Procedure § 1504.01 (8th ed. 2001 rev. Oct. 2005).
To qualify for patent protection, a design must be inseparable from the article to which it is applied and cannot exist alone merely as a scheme of surface ornamentation. It must be a definite, preconceived thing, capable of reproduction and not merely the chance result of a method.  Manual of Patent Examining Procedure§ 1502 (8th ed. 2001 rev. Oct. 2005).
A broad definition has been given to the phrase “article of manufacture” to include a “sarcophagus monument” (Crier v. Innes, 170 F.324 (2d Cir. 1909)), a “grandstand” (In re Hadden, 20 F.2d at 276 (D.C.Ct. Appeals ), but not a water fountain which was believed to be merely “a fleeting product of nozzle arrangements” (In re Hruby, 373 F.2d 997 (CCPA 1967). 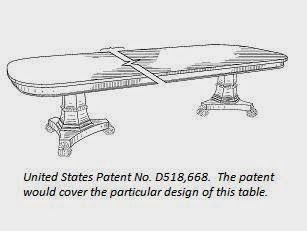 To be ornamental, a design must present a pleasing aesthetic appearance and must not be dictated solely by functional considerations.  See, e.g., In re Stimpson, 24 F.2d 1012, 1012, 58 App. D.C. 86 (D.C. Cir. 1928) (design of rivet-setting machine not patentable; “There is nothing about the assembled mechanical device which serves to beautify, embellish, or adorn it. …The design in issue may be new and original as to form, but it is not ornamental, inasmuch as it does not please the senses or excite the emotions by its color effects, or by its proportion of form. It is not necessary that the design … should be a work of the fine arts, but it is necessary that the design should be … either embellished or adorned, or distinguished by its grace of symmetry of form.”).
Design Must be Nonfunctional           A design that is dictated by considerations of function is not a proper subject for a design patent.  Further, if the sole points of novelty over prior designs are dictated by functional improvement or alteration, a design is not patentable.
Parts of Articles can be Protected      Section 171 also authorizes a patent claiming the design for a part of an article.  In In re Zahn, the court determined that a design need only be embodied in some article, but did not need to be a design for a complete article.  In Zahn, the design patent was embodied in the shank portion of a drill.  As seen in the figure, below, design patents are available on  just the “table leg” which would protect the use of the table leg with any type of table top.

Conclusion.     If you invest in new designs for furniture, and you are tired of having your new designs copied and sold at lower cost, protecting your new designs with a design patent can prove beneficial.  A later article will address the question of infringement of such patents, but most decisions would prevent an exact knock-off of your design.   A design patent can significantly help in your pursuit of such knock-offs, provide enhanced damages for such infringement, and thereby protect your investment..
If you would like to discuss the availability for design patent protection or a dispute arising from the alleged infringement of a design patent, please contact Bert Andia at (336) 273-1600 or bandia@greensborolaw.com.